During the past 1 year, Android OS based phones have taken a majority share in the market and quite a few of them belong to low-end price range. Here we provide you a list of the cheapest Android phones available in the Indian market today, all of which are priced below Rs.10,000.

This was one of Samsung’s first and cheapest device in the Android market. Some of the key features of this phone are Android 2.1 Eclair OS, 2.8 inch capacitive touch screen, 2 MP camera without flash, 600 MHz CPU, Internal memory of 170 MB and support for 3G and WiFi. The phone is right now priced at around Rs.8,900. We feel that it is a good package overall, mainly due to the fact that it is from Samsung. You can even check out the comparison of Samsung Galaxy 5 and Micromax Andro A60. 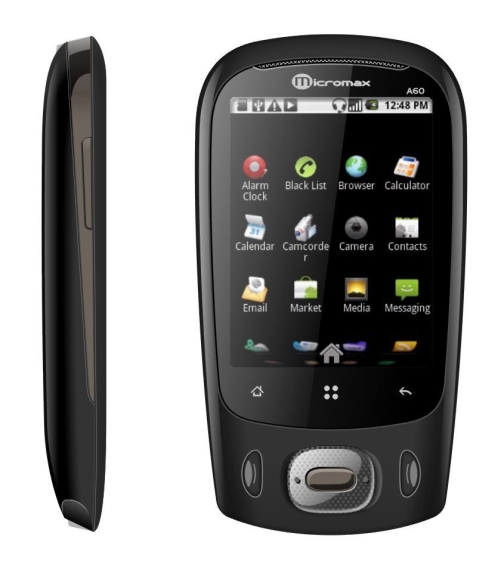 This android device is from one of India’s most successful handset maker – Micromax Mobile. The Andro A60 has specifications such as 3.2 MP camera, 2.8 inch resistive touch screen, 600 MHz CPU, Android 2.1, Internal memory of 150 MB and support for 3G and WiFi. The phone costs around Rs.6,600 and is obviously a deal at that price. The Micromax A60 is one of the cheapest Android phones in this segment and we feel that the company is also quite reliable.

Huawei is a China based International handset maker and is a relatively new company in the Indian scenario. The Ideos is a Android 2.2 Froyo based device and is available in India with an AIRCEL connection. Its key features are a 2.8 inch capacitive touch screen, 528 MHz CPU, 3.2MP camera, 3G and WiFi. It is priced at around Rs.8,499 and you even get the benefits of the AIRCEL plan. The Huawei Ideos is definitely not cheap like the Micromax but it is priced reasonably as well as it comes with Froyo and a capacitive screen.

Computer company Dell is a relatively new entrant in the mobile handset market, especially in India. The Dell XCD28 is Android 2.1 based phone and its other important features include 3.2 mega-pixel camera, 600Mhz CPU, 2.8-inch resistive touch screen, 200 MB Internal user memory, and like all the above phones, has support for 3G and WiFi. It is priced well at around Rs.8,000 but has disadvantages such as having a resistive touch screen.

This is Samsung’s latest offering in the entry-level android handset market and the phone is scheduled to be launched in India, sometime during next week. We had already given you the news about the launch of this phone just a few days back. The Galaxy POP is Android 2.2 Froyo device and has a large 3.14 inches TFT touch screen.It even boasts of other features such as a 3 MP Fixed focus camera, 600 MHz CPU, Internal memory of 160 MB and 3G and WiFi. The phone looks like a feature-rich handset and you can order Samsung Galaxy POP from Flipkart for Rs.8,999.

As you can see above, there is a lot of choice in the entry-level android handset market and the selection of any phone depends upon the personal opinion and needs of a particular buyer. You can choose the Micromax if you are budget conscious or select the Galaxy 5 if you want something standard. If you want a feature loaded phone with an AIRCEL connection, you can select the Huawei Ideos. The Samsung Galaxy POP is also a very desirable phone at that price.

How to Create a Private Photos Folder in Google Pixel Phone

How to Play the Lottery on Your Phone?